Today we completed day one of the summer 2017 English Kindergarten program!

Here’s an update on today’s activities from PEC EK! 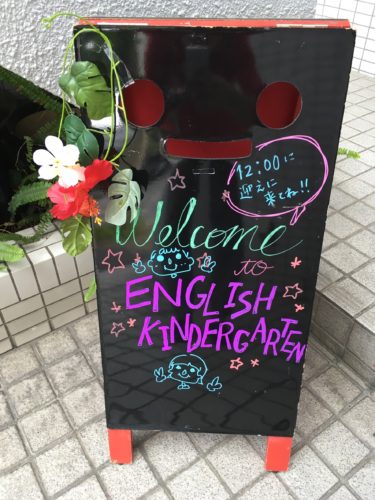 Day one was a roaring success here . With an agenda packed full of exciting and educational activities, the kids really just couldn’t get enough. We began the day in tip-top PEC fashion by flying into the classroom, landing in America, declaring the date – ‘It’s July 26th!’ – and making short work of the ever so formidable 100 Questions challenge. After such a demanding start to things, we took a breather and enjoyed story time. Today I read Leonardo, the Terrible Monster, to general acclaim from my riveted audience. After we finished reading, there was a hushed silence, a pause as we all took in the true splendor of the English language. But this pause couldn’t last too long, because we had oh so much more to do! 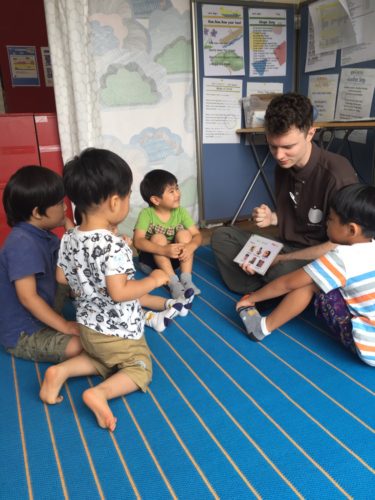 Next on the schedule was the meat and bones of today’s English Kindergarten lesson: Animals and Colors. We considered five animals, and their attendant colorations, with a seriousness that even the most prestigious of scientists, professors and astronauts would have been impressed by. We studied P-I-G, Pig!, and pink; F-R-O-G, Frog!, and green; P-E-A-C-O-C-K, Peacock!, and blue; E-L-E-P-H-A-N-T, Elephant!, and grey; F-O-X, Fox!, and orange! What fun! Our assiduous students then went through a number of trials which tested their will, their courage and their memory of the vocabulary that we just covered. We played, ‘What’s missing?’ and ‘Match the color to the black and white animal’, at varied levels of difficulty, until we all began to feel that after such hard work there was really only one thing to do…. EAT A SNACK! Now, believe me, I was as much in agreement about the necessity of snack time as any one of those hard-working students – I defy you to say otherwise! – but before the snacks could flow, our pupils had to sing for their supper. And sing they did! We all sang! 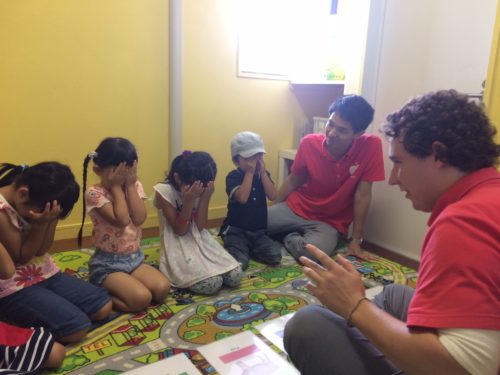 For our snack we made animal toast using chocolate spread, bananas, knock-off M&Ms and chocolate chips. Today’s featured animal: Mr. Delicious Bear. I’ll paint a picture of these culinary masterpieces for you. The bread is warm, and delightfully brown from the toaster. We spread the chocolate across the surface in a smooth plane of sweet sweet goodness. Two slices of banana make ears, two knock-off M&Ms make eyes, a half slice of banana makes a nose, and the chocolate chips creep across the bottom of our chocolatey toast to make a grin that might seem more fitting at Halloween time. Our creations looked great, and now they just needed names. Mine was called Marvin. We also had an Alex, a Hannah, a Matthew and even a Kaoru. I won’t get into the weeds by going over some of the more far-fetched names, but things really did get imaginative. Our toasts christened, all that was left was for them to meet their maker. CHOMP CHOMP CHOMP! We gobbled down our bears and they were oooooh so good. Bye-bye Marvin. And that was snack time.

The final portion of the day – before our time outside – was craft time. We made peacocks by loading up our hands with lots of blue paint and then slamming them down smack-dab in the middle of nice white sheets of paper in order to claim them as our own with a blue print of ownership. Hands painted, hands slammed, we then rushed off to the sink and did some much needed cleaning up. But not before paint wound up on faces and other hands. A fistful of paint is something to be reckoned with! We all felt the power of the paint as we brandished our blues and threatened the poor and defenseless Takahiro as we made our march to the sink. The peacocks turned our beautifully, by the way.

So, yes, English Kindergarten was great fun! And there’s more where that came from. Tomorrow the theme is animals and sounds. It’s going to be a blast!

Stay tuned for more updates on the exciting events over here at PEC.

That’s all for now!