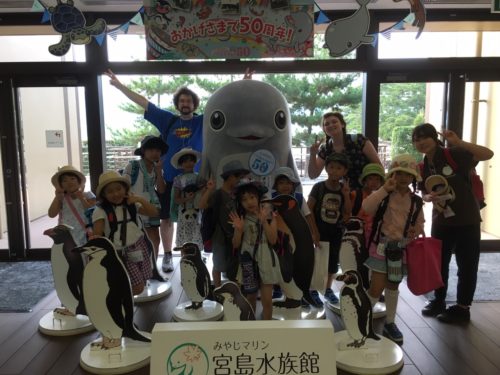 We left from Tokuyama a little sleepy and hot, but a very nice train conductor gave our students a present! He was very nice and super cool! Then we got on the train and went to go pick up our friends in Hikari. After we had everyone together we went over the rules of the trip and some basic vocabulary. We then tried out our English on the train ride down! After we changed trains at Iwakuni we were off to Hiroshima. The ride down we were talking with students and looking out at a bridge! 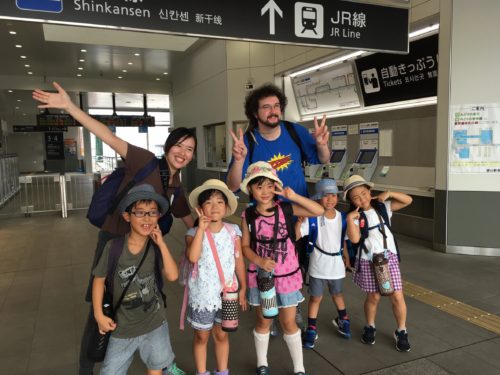 Once we got to Hiroshima it was gumdrops and roses as we walked to lunch. Once we got to the restaurant it was time to eat, but not before some English practice! We sat down on one side of the restaurant and made sure that everyone drank some water. Everyone having said “thank you” and “chopsticks please” it was time to eat. We had Okonomiyaki and it was delicious. All of the children kept saying that it was “Yummy!” 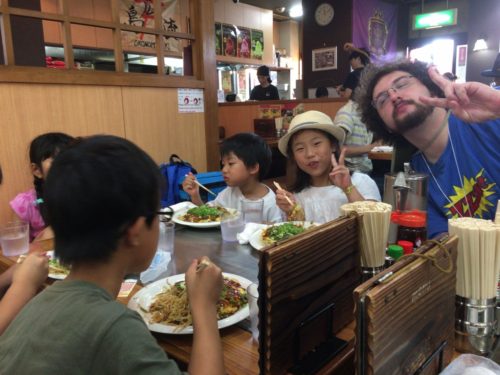 Next it was time to ride a boat. We got on the ferry and rode across the sea like the vikings of old, as tide and beast below fell to our wake as we stormed across. We also practiced our questions for the interview that was going to happen on the island. Then we got off the boat and it was up to Hannah and I to find some people to talk to. We found a couple from Spain and an English teacher from Holland. They were all super nice, but a deer came and interrupted the interview by eating one of our student’s workbook. So after fighting and fleeing we were missing about a quarter of a workbook. 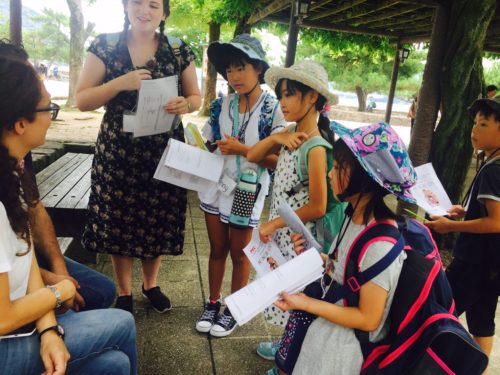 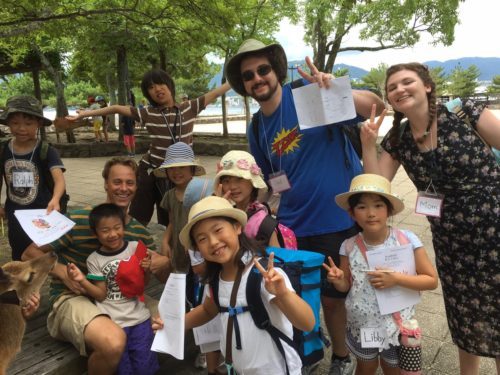 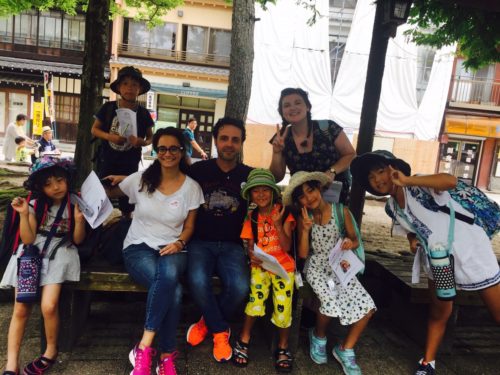 Then came our hike to the fish house, or as some people say, “aquarium”. Once we made it there we saw a lot of fish. They came in all shapes and sizes and the students had a ball running around the tanks of fish, sharks, whales, sea otters, sea lions, and snakes. The students then got to an interactive exhibit. It was time to grab as many starfish, sea slugs, and fish as you could. We felt the scaly touch of the ocean gently graze our fingers and bring them into its slimy caress. After washing our hands we went to have a snack. We ate some delicious ice cream at the cafe next to the sea lions. Munch, munch, munch was the sound of happy children. Sadly after our break it was time to go, so exited through the gift shop, making sure that everyone bought a souvenir. Then we began our journey back into the wild so we could ride the ferry. 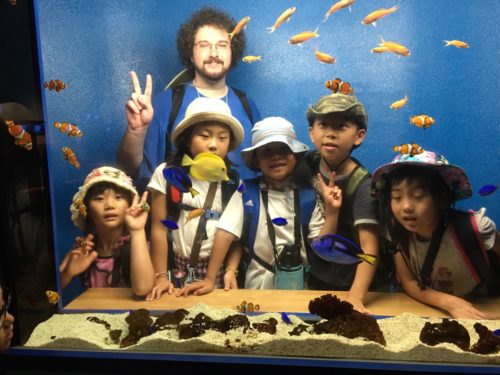 Next came the ride to dinner. We all piled into a street car and rode for a long time. During our trip we all talked about the island and what we liked about it. It was great and we eventually made it to the restaurant. What a sight it was when we finally made it! Foods of all sorts rested on elegant, silver serving trays. So we practiced our English for dinner and our manners. Then we all got up and in a line went to get food. Like feral animals charging towards a wounded babe, we descended upon the cooks and diners. There were a ton of different foods to choose from and after a couple of sets of curry, soup, chicken, potatoes, other chicken, and rice we were full. There was only room for one more thing, and that was ice cream and chocolate fondue! So after our wonderful meal we left the restaurant and headed off to our hotel. 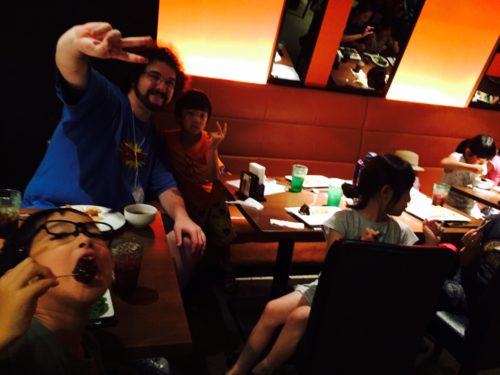 That night we came to the hotel with a bundle of sleepy little adventures, but they still had enough energy to bounce around the hotel room for a little while.. It was time to take our baths and hit the hay. So after a relaxing and very nice hot bath everyone brushed their teeth and drifted off to sleep. Thus ending our day of grandiose exploits.

The next day we awoke and had a down right wonderful breakfast. The silver tubs were full of tasty food that once again had the children saying, “Yummy!” After our fruits, bacon, soup, curry, juice, waffles, fish, sausages, and potatoes we went up stairs and filled in the workbook. Now it was time to begin the long journey home. So we walked to the station and after forming and orderly line, we waited for the train to come. It was a crowded affair with far too many moments of frantic head counting, but we all made it to Iwakuni and from there it was a smooth as silk over glass. We played games with the children for most of the ride back thumb wars and “look at that” were popular in my group. We played until we made it to our stations and had to say goodbye to our compadres. Ending the journey of 14, who bravely went to a deer infested island, ate delicious food, and lived to tell the tale. 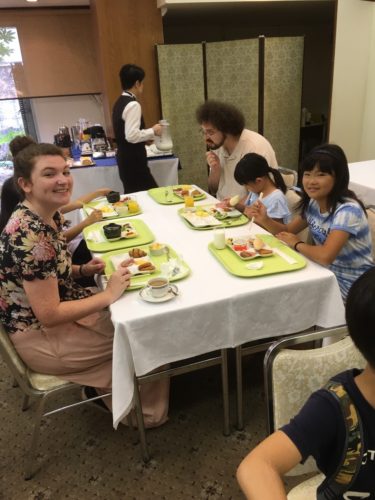